As the world gets connected, we see the emergence of a wide variety of sophisticated and personalized mobile devices. Although the number-crunching power of the higher-end devices is very respectable, there is still a need to build applications that use minimal resources, and that are portable.

Java Platform, Micro Edition (Java ME), formerly known as J2ME, with Java’s inherent ‘Build once, run everywhere’ concept has been adapted to build resource constraint applications for these myriad devices.

This year Java ME marks its 10th anniversary. Since its inception in 1999, J2ME was widely accepted in the Mobile application development community. Java through J2ME provided a highly portable and precise runtime environment for mobile, PDAs as well as other embedded systems that include Smart cards, TVs and Printers.

The market adoption in last 10 years has been tremendous. Almost all mobile handsets from major manufacturers like Nokia, Sony Ericsson, Vodafone, Motorola, Sprint etc. had been Java enabled by 2006. Developers around the world continue to develop applications for Java ME. A number of websites have also been dedicated to Java ME, helping developers in their endeavors.

The J2ME continues to evolve through a Java Community Process. A Java Community Process (JCP) is an open organization that maintains the evolution of Java platform. The J2ME JCP involves the Mobile leaders like Nokia, Sony Ericsson, Vodaphone, Motorola, Sprint, Nextel, IBM and many others thus making any update readily marketable.

The Standard vs the Microedition

Java Micro Edition applications target micro devices that are 16-bit or 32-bit processors and have a memory footprint in the range of 128KB-2MB. In order to implement the same, the Java Virtual Machine (JVM) has been trimmed in the following ways:

Before going further in this discussion, let us focus on the definition of Category and Family of devices. A Category is a type of device. As per the definition, cell phones and pagers are different categories of devices.

The Java ME architecture is based on two configurations:

The article will mainly concentrate on CDLC and kVM. 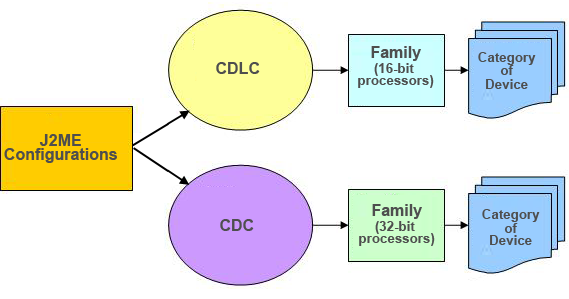 Figure 1 The relationship between Category of devices, Family of devices and Java ME Configurations.

The Java ME Runtime environment consists of the following layers: 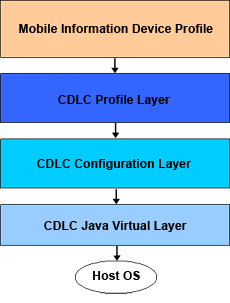 The significant Java ME APIs available so far can be categorized as follows:

In this article, we will develop a MIDlet that will display a Greeting Message with the current Date and Time.

The important components of the MIDlet class have been discussed as follows:

The complete code has been included as follows:

This section will show how to deploy a MIDlet application on Wireless Toolkit 2.5. The below are the steps the above application was created and built:

1. Create a Project: Invoke the Sun Wireless Toolkit 2.5 from the Program Menu. Hit New Project to create a new project or Open Project to open an existing one. Refer Fig-3.

On New Project, the dialog as in Fig-4 appears.

Once a valid Name has been entered, a dialog for the API selection appears. Refer Fig-5. 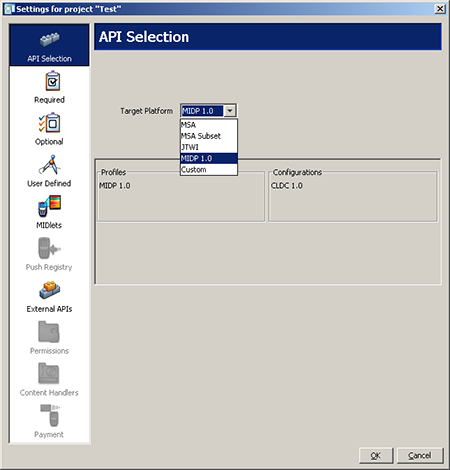 We will choose MIDP 1.0 for our examples.

If we select Open Project, the dialog as in Fig-6 appears. 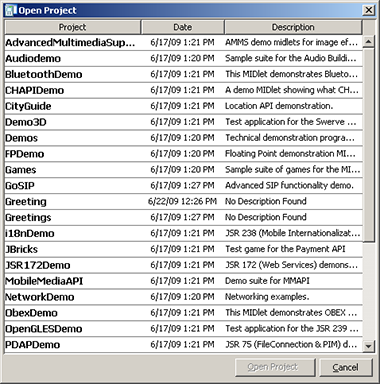 Once a project has been successfully created, a folder by input name is created under C: 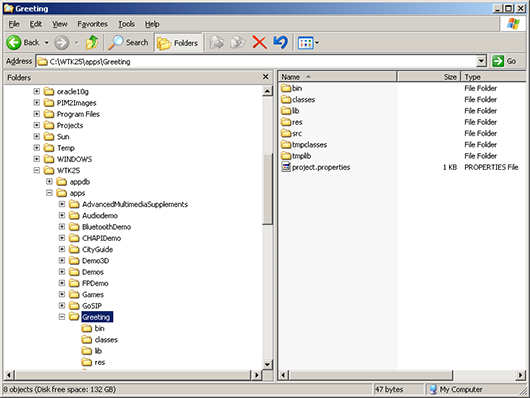 Put the attached source code as Greeting.java under C:

2. Build Project: After project has been created, hit the Build button to build the same. Please revisit the source code, if compilation errors arise. On successful build, the dialog as in Fig-8 appears.

3. Run Project: Hit Run button to run the application. You can choose to change the Device from the Device drop-down. Please refer Fig – 9.

Once run, the phone screen will display a Greeting message with current date and time. See Fig-10

The JAD file created in the process under C:

In this article, we gave an overview of the Java Platform, Mobile Edition, an initiative of Java for the mobile devices. As the mobile world sees an ever increasing introduction of new devices, there is a requirement for applications that are system independent and use minimal resources. Java Mobile edition has the answer.

With the new versions coming up with more advanced API like Media, the Java ME has become a favorite of the Mobile Development community.