In this section we have assembled the latest trends regarding mobile phone software. These statistics relate to operating systems, app use, and mobile browsers.

Android remain in the lead for mobile OS popularity, with a 78% market share in Q1 2015. This is a slight decline since Q1 2014, in which Android had a 81.2% share. This may be related to the increase in iOS popularity that has grown from 15.2% to 18.3%. Windows Phone and Blackberry OS have shown a very marginal increase and marginal decrease respectively, remaining mostly unchanged.

Here are the OS market share statistics for Q1 2015:

18. Android vs. iOS by country

iOS has proven to be most popular in Denmark, Australia, Canada, UK, Japan, and Ireland. Android, on the other hand, is most popular in Macedonia, Albani, Serbia, Panama, South Korea, Vietnam, Egypt, and India. Interestingly, Android appears to be the leader in South Korea despite extremely strong sales of iPhone 6 Plus. 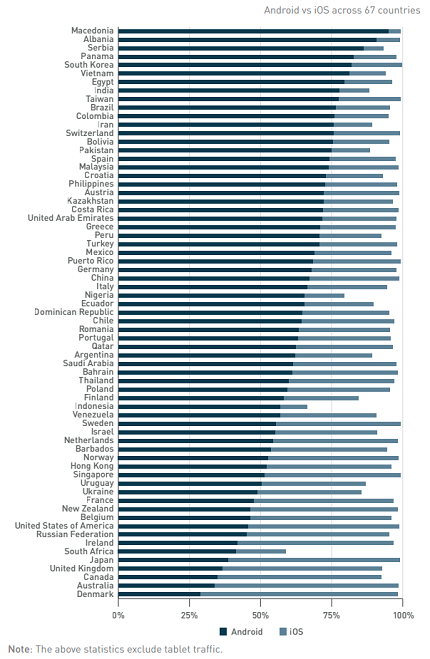 Android has overtaken iOS for the majority market share for tablet operating systems. Q1 2015 shows Android in the lead with 52.05% share, with iOS behind with 39.89% market share. Apple figures for Q1 2014 had iOS at 53.54% and Android 35.84%, suggesting a significant shift in popularity over the course of the past year.

As of May 2015, Chrome Mobile was leading the mobile browser market with a 30.75%, having overtaken Safari as the leading browser in March 2015. Safari is close behind with 24.92% share. Android, UC Browser and Opera currently hold a market share of 17.07%, 12.53% and 8.58% respectively. Chrome Mobile continues to show steady growth into the future.

Here are the May 2015 stats for mobile browser market share:

Here are some statistics comparing the web traffic on Samsung and Apple mobile devices, categorised by country: