Developers inspecting the user agent profile of a modern handset like the
Motorola XT682 ATRIX TV may be surprised to discover the following ImageCapable declaration which indicates whether a device can display images or not:

This clause is a remnant from a time when mobile phones boasted displays that
showed just a few lines of monospaced characters and could not render bitmap
images. As a remedial feature, mobile clients included a set of glyphs conveying
stereotypical representations of actions, states and objects. These graphical
symbols, frequently stored as a special font in the terminal, could be referred
to in Web pages and served as a substitute for richer, but unprocessable pictures.
(HDML, a markup
format for the mobile Web elaborated in the mid-1990s, offered a syntactic
construct to this effect).

Pictograms were soon considered to be useful as such, and made their way into
i-Mode, WAP and UNICODE specifications.

Whether in household appliances, packaging, or car dashboards, pictograms are ubiquitous in daily life; their application in mobile services is thus a natural step.

Symbols with easily recognizable semantics can improve the usability of mobile Web
applications when used judiciously, for example in the following cases: 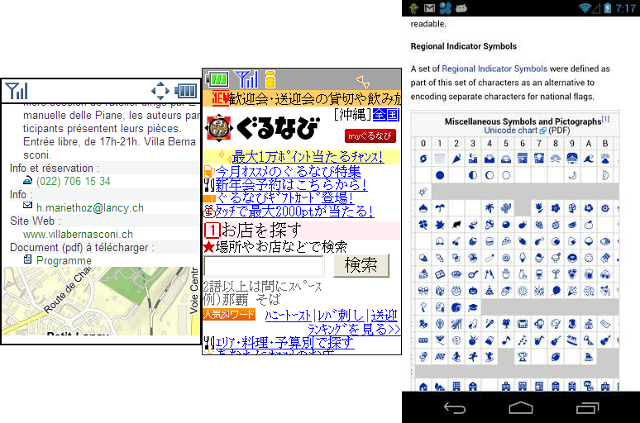 The preceding picture illustrates various forms of pictograms. From left
to right: a WAP XHTML document with symbols identifying link types; a typical
i-Mode page generously spiced with emojis; and a Wikipedia article showing
support for ISO pictographs on an Android handset.

Just like with many other aspects of the mobile Web, the deployment of this
venerable, albeit little-known building block must cater for various generations
of competing standards and discrepancies between implementations. In the following,
we survey the ways to declare pictograms in mobile Web pages and provide
correspondence tables between relevant symbol dictionaries.

The browser developed by the firm Openwave (formerly called Unwired Planet, then
phone.com, today Myriad) is the longest serving mobile Web client in existence,
and is still deployed on numerous handsets with limited hardware capabilities.
It supports a form of pictograms identified by name or by number:

The syntax works in XHTML and WML. Attribute localsrc takes
precedence over src and alt, in both cases displaying
the pre-defined icon star2.
The numbering scheme is recommended. Recognizing an Openwave browser is
easy, since its user agent identifier matches the egrep/Perl pattern:

Nowadays, the original Openwave browser documentation can be retrieved only
from the Internet archive.

To this day, the Japanese operator KDDI commercializes phones featuring
Openwave software which, depending on the device class, incorporates built-in
icon sets supplementing the basic dictionary, or retrieves them as external
resources.

KDDI publishes on its WWW site a correspondence table between handset models
and supported icon ranges. Although all pictograms are assigned names, they
are usually embedded in Web pages with the Openwave numbering scheme.

The WAP standard from the Open Mobile Alliance comprises a dictionary of
62 core and 205 optional pictograms, markup to declare them, and a fall-back
mechanism in case a symbol is not implemented in the handset. In XHTML mobile
profile:

The browser outputs the pictogram for new if locally available;
otherwise, it downloads the file indicated in the img tag,
or displays the string in the alt
attribute if the image itself cannot be rendered. Older browsers (such as
Motorola MIB) may subject pictograms to the same restrictions as external
bitmaps – for instance enforcing a limit on the number of images that can
appear on a Web page.

The local presence of specific symbols may vary from a browser version to
another; the following compatibility table therefore considers whether the
client software recognizes the WAP pictogram syntax and defaults correctly
to an external image when appropriate.

It appears that, while most browsers recognize the syntax declaring WAP
pictograms, this feature is fully supported only by legacy browsers not
based on Webkit and explicitly preferring XHTML mobile profile over HTML
and XHTML basic. This presumably excludes the newest generation of the
NetFront (NX), Obigo (v. 10) and Myriad (Openwave v. 9) software built
upon Webkit, which could not be tested at the time of this writing. One
should also keep in mind that interactive mobile Web validators such as
mobileOK
and
mobiReady
are geared towards XHTML basic, and hence may erroneously flag WAP
pictograms as mobile-unfriendly resources.

The official reference for WAP pictograms is published on the
OMA
WWW site.

Web pages access all these symbols via numeric character references:

ISO pictographs are thus dealt with exactly like characters; there is no
graceful fall-back if the necessary font is not installed in the
terminal – missing glyphs might appear as question marks, black squares, or
blank spaces. Absent a Javascript routine to test the existence of specific
glyphs on a client, support for ISO pictograms must be determined on the
application server via a device description repository.

Since they are resources of the operating system, pictographs are in principle
not tied to the browser and are available to other software modules as well.
However, because of their intrinsic nature as characters, some caution is required:

In the following, we consider the pictograms listed in tables of sections
7 and 8.
IPR symbols refer to signs for “copyright”, “trademark”
and “registered trademark”.

With Bada, BlackberryOS, Meego, Symbian and WebOS being either wound down,
neglected or undergoing an uncertain overhaul, support for ISO pictographs
is likely to remain the preserve of Windows Phone, iOS and Android in the
foreseeable future. Only Nokia S40 might be in a position to adopt this
feature in the short term.

Mobile applications developed in the Far East rely extensively on pictograms.
The Japanese mobile Web is a world unto itself, and its implementations of
pictograms (called emojis) exhibit a number of peculiarities:

This article at mobiForge
clarifies the underlying concepts and the intricacies of character encoding.

Operators have published (mainly in Japanese) detailed documentation about
their versions of emojis; they can be obtained from the WWW sites listed above.
Comprehensive correspondence tables describing how to insert emojis into Web
pages are presented at trialgoods.com.
In 2012, Japanese operators harmonized the design of their pictograms in the
style of i-Mode emojis.

Emojis are so popular that Apple was compelled to implement a version derived
from the Softbank dictionary upon launching the iPhone in the Japanese market.
Version 5.0 of iOS also made these pictograms generally available to non-Japanese
iPhone models after a reorganisation to comply with the ISO norm – which implies
that pre- and post-iOS 5.0 devices refer to emojis through separate numeric ranges.

The site iemoji.com lists each
iOS emoji with its numeric encodings.

While there is ample on-line documentation about finding equivalent
symbols in Japanese emoji dictionaries, such information is sorely
lacking for the formats used in the rest of the world. We present here
a correspondence table between WAP, Openwave, ISO, and iOS pictograms.
The entries are organized according to the core WAP dictionary, and
therefore deal with a limited subset of the standards under consideration.
This is justified on the following grounds:

Hence, these tables should prove especially useful when setting up universally
accessible mobile Web sites – despite the fact that several pictograms
(especially “beginner”, “clear” and
“toll-free”) betray their Japanese
origins. Developers exclusively targeting modern smartphones need only
refer to the ISO norm when inserting pictograms in their applications.

Values are hexadecimal references to code points in the UNICODE space, and
images exemplary depictions of the associated symbols. Sometimes, an operating
system provisions the pictogram via a different UNICODE character, whose code
point is then mentioned explicitly. We suggest approximate substitutes whenever
a straightforward translation from one dictionary to another is infeasible:

Class “emotions” is the sole subset of the optional WAP dictionary
that has enjoyed some (modest) level of support in mobile phones. It comprises a
number of smileys for which we propose equivalent iOS, ISO and Openwave
representations. This table also applies the tweaks and descriptive conventions
used for the core dictionary.

Smileys have long been extremely popular in messaging applications and
Internet discussion forums. Every major platform (Yahoo! Messenger,
Microsoft Messenger, America Online, among others) offers a rich set
of icons to let users liven up the texts they send to each other.
Emoticons are entered as pre-defined identifiers or character sequences
(for instance :-) or 8-|).
The messaging clients of some mobile operating
systems (notably Windows Phone) follow a similar approach.

Unfortunately, major device description repositories provide very few
data describing pictographic terminal capabilities. Developers may resort
to attributes such as the type of browser or the version of the operating
system run by the handset in order to fine-tune the representation of mobile
pages.

Programs that map pictogram dictionaries and encodings to each other
are necessary when generating content for terminals implementing
different pictographic formats, or when exchanging messages amongst
them. Here is a sample of public-domain tools that translate between
popular Japanese conventions.

We are not aware of any similar gateway utilities for ISO, Openwave and WAP.Concluding remarksThe interest in pictograms was rekindled when Apple released an iPhone
model with an abundant collection of colourful icons embeddable in
applications and Web pages. The revision of UNICODE published in October
2010 increases the relevance of pictograms for smartphones, but feature
phones and legacy handsets have long been endowed with a comparable
capability – albeit via different mechanisms. The information presented
in this article should enable developers to decide how to integrate
pictograms in their Web sites – taking into account requirements about
application look-and-feel, the range of targeted devices, and the facilities
to configure their Web service platform with pictogram generators.We recommend a utilization of pictograms more parsimonious than what one
can often observe in Asian mobile Web sites. Hence, the core dictionary
should suffice for the first couple of – very common – scenarios listed
in section 2.Beyond this basic set, ISO specifies a profusion of idiosyncratic signs
for the Chinese horoscope, Japanese places and holidays, Nippon cuisine,
service ideograms, manga characters, as well as more universally interesting
pictographs related to office supplies, commercial and professional activities,
sports, games, vehicles, plants, animals, the weather, geometric shapes and
additional emoticons. WAP defines many optional items that map easily to
those ISO code points, but lacking support in WAP handsets makes this
compatibility immaterial in practice. On the other hand, about 160 actual
Openwave icons correspond to symbols scattered throughout UNICODE and may
prove occasionally useful when catering for low-end devices. Developers
can peruse the Openwave documentation to ascertain the equivalence of
individual pictograms on a case-by-case basis. Sites such as
shapecatcher.com and
fileformat.info
have query tools that facilitate the exploration of the UNICODE character space.Of course, the situation may arise where the symbol of interest is completely
unsupported by a handset or a standard. The manipulation of custom icons
(such as those used in the present article, extracted from the
fatcow collection of free icons)
is an issue to be addressed in another instalment.