In this second article in our series on HTML5 for mobile web (first part here), we cover the Geolocation API. For mobile users, location-based services are hugely compelling. Long the holy grail of mobile applications, and something of a missed opportunity for service providers, the addition of location-awareness to mobile apps has made for some very exciting use cases.

Apps and services can take on a whole new dimension when location is added into the mix. Search results gain an extra relevance cue when a nearby option is added, as location information provides a very useful and intuitive filter. Navigation- and map-based apps and games become possible. Even augmented reality apps are no longer beyond the reach of the mobile browser, as illustrated below. 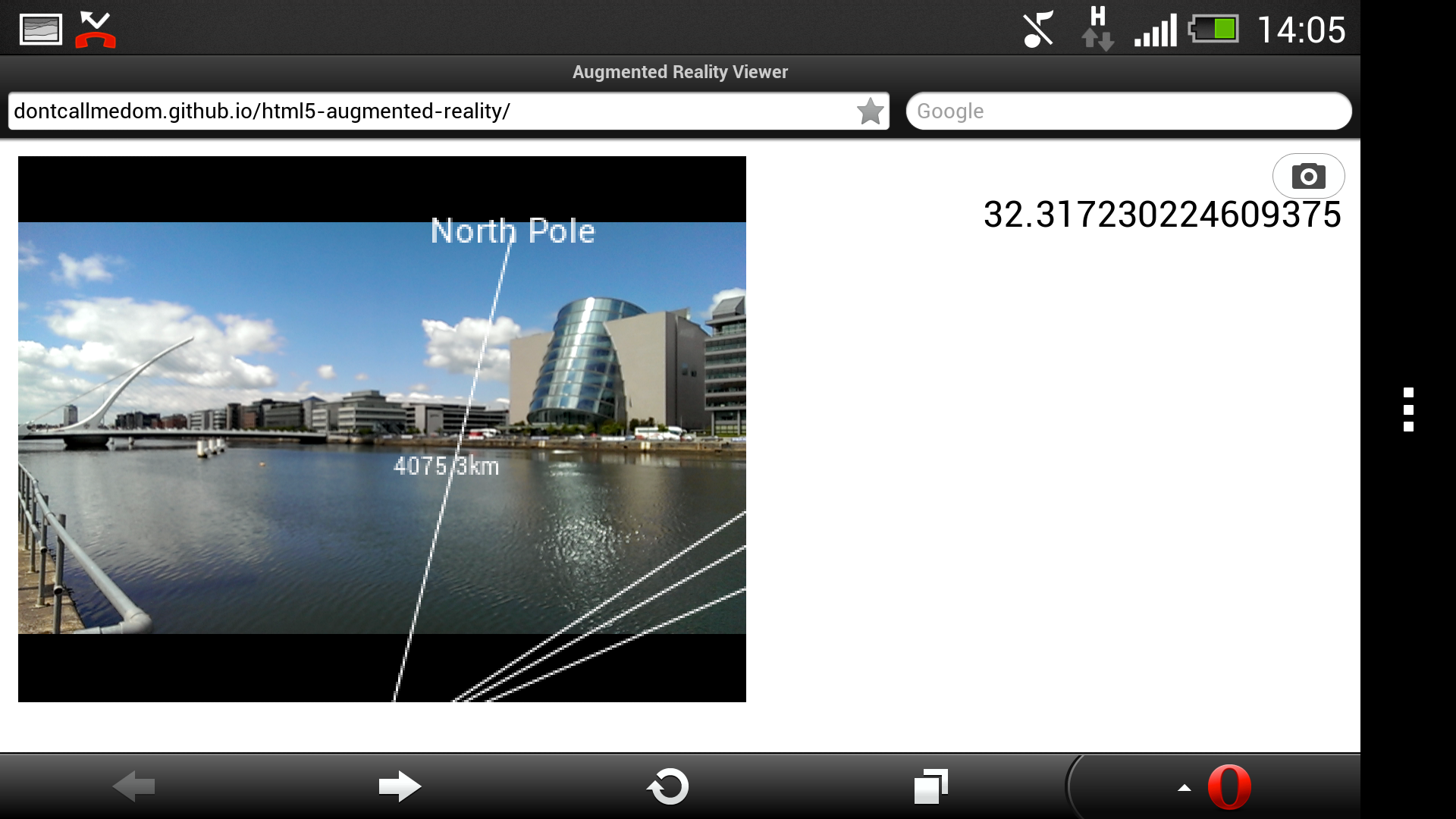 In the following sections we take a look at HTML5 Geolocation from a mobile perspective. We look at the technologies involved and work through some map-based examples to see what the Geolocation API has to offer.

There are a variety of techniques and sensor data that modern mobile devices can tap to figure out the location of a device with varying degrees of accuracy. The most common are discussed briefly below.

Geolocation was at the outset somewhat haunted by privacy concerns. Such concerns have, to a certain extent, become more muted. Or at least the privacy controls that are in place are enough to satisfy the average user such that he or she is willing to give up some degree of privacy to benefit from some location-based service. The Geolocation API quite clearly addresses privacy and puts the user firmly in control by mandating that the user’s permission must be obtained before location information can be shared. From the specification:

So, permission must be obtained from the user, the website hostname must be displayed, and it must be possible for the user to revoke permission.

This part of the specification is manifested in a similar way across the various mobile browsers. When a location request is made from a web page, a dialog is popped into the user’s view to request permission to access the location data (Android and iOS implementations are illustrated below). 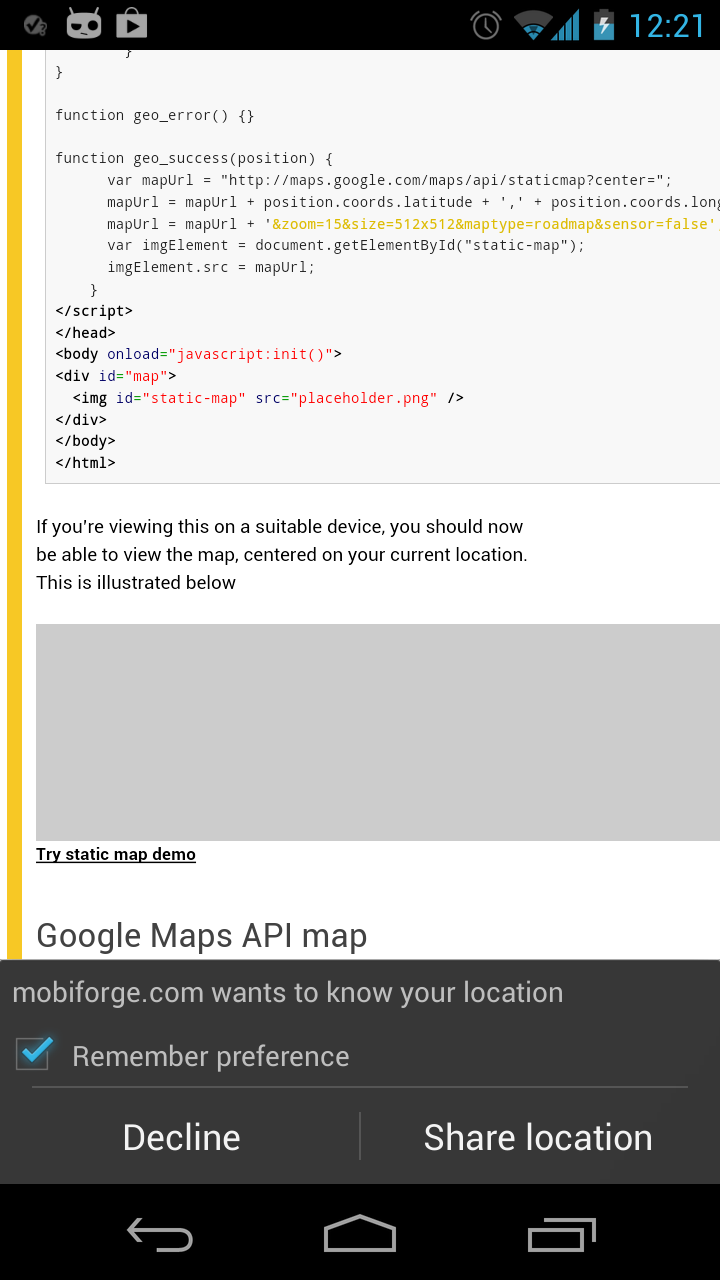 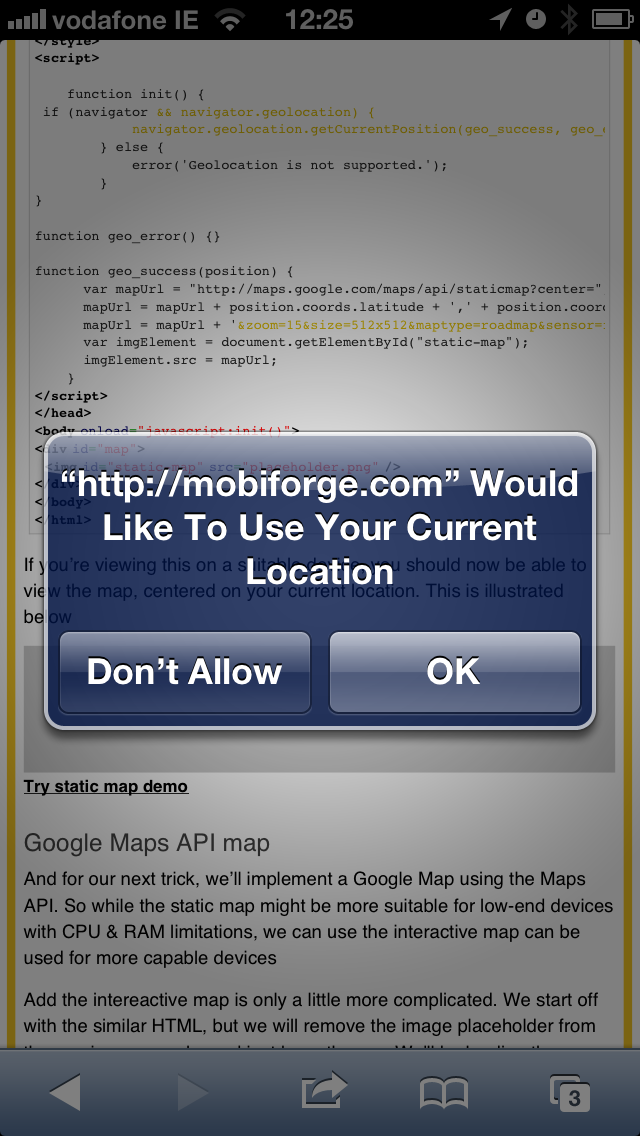 In the Geolocation API, location is defined in terms of Position and Coordinate objects. A Coordinate has the properties listed in the table below.

The Position object is simply a Coordinate coupled with a timestamp.

As shown in the table above, the properties altitude, altitudeAccuracy, heading and speed are all optional. So only the latitude, longitude, and accuracy properties are guaranteed to be present. Therefore we will focus only on these properties in our example below.

As an example to give a flavour of the Geolocation API, we will display a map in the browser, centered on the device’s current location. To start us off, we’ll use the Google Static Maps API, which returns simple static map images. Once we’re comfortable with this, we’ll implement the more familiar interactive maps that we’re accustomed to seeing on our desktop computers.

First, the HTML. We add a div and a placeholder image. We will later update the src attribute of the image with the URL for the static map image.

Next we will access the device position data by making a request to the Geolocation API. At its most basic, this involves a call like the following:

However, we need to check for support first. To do this we make the following call:

We also need to define the successCallback function for when the position data is returned. It’s in this function that we will build the URL for the static map, centered on the latlon data we have just obtained.

The position object is passed as argument to this function. So now we need to know how to access the location data from this object. Recall from the table above the attributes of the coordinate object, and then accessing this required data is easy:

will give us the data we need.

Once we have this information we need to pass it with our URL for the static map tile:

And finally, when this URL is built we simply set this as the src attribute of the img element we created above:

If you’re viewing this on a suitable device, click the link below the grey box to view the map, centered on your current location. (Full example code can be downloaded at end of article).

And for our next trick, we’ll implement a Google Map using the Maps API. So while the static map might be more suitable for low-end devices with CPU and RAM limitations, the interactive map can be used with more capable devices.

Adding the interactive map is only a little more complicated. We start off with similar HTML, but we will remove the image placeholder from the previous example, and just keep the div. We’ll be loading the map into this div:

Now, let’s add in the Google Maps library by adding the following:

Now that the library is in place, we configure our map options and fire off a request for a map. The main options we will be interested in are the zoom level, the map type, and of course the latitude and longitude. We access the lat and lon from the position object as we did in the last example and pass to the LatLng function of the Google library.

Next we grab our map div, and load the map into it:

So, our updated success function now looks like this:

To see it in action, click the link below and the map should be loaded into the grey area. (Full example code can be downloaded at end of article).

The Geolocation API provides an interface to further tweak device location requests. The available properties are outlined below. Of particular interest is the enableHighAccuracy option. As mentioned above, there are a number of different ways that the location of the device can be ascertained. Some approaches, such as cell tower triangulation, can be quick and dirty and provide an approximate location, while other approaches can be slower and more power-consuming, but more accurate, such as GPS. The Geolocation API offers an interface by which the desired location accuracy can be specified. Depending on your application, you may or may not require high accuracy.

Options are passed as an object with the position request. So, to request a location update that was no older than ten minutes, with high accuracy, and with a wait of no longer than one minute before timing out, the code would look something like the following:

Note that the watchPosition() function returns an integer. We can use this value to end monitoring of the user’s location, so it’s useful to store it for use later on.

When the application has no more use for the user’s location, it should call clearWatch() to prevent the successCallback() function from being triggered any more. This function takes as parameter an integer value corresponding to the ID of the watch to be cleared – the value returned by the watchPosition() call.

For our final example, we’ll build on the previous examples, but this time we’ll use watchPosition() to continuously re-center the map on the device location whenever the location is updated. To get the full benefit of this example you’ll need to get up and run around outside for a few minutes while looking at this page on your phone.

First, we modify our code to use the watchPosition() function instead of getCurrentPosition(), and we’ll store the return value for later use. As with getCurrentPosition, we specify the success callback function. This time though, we’ll add the enableHighAccuracy option so that we’ll notice smaller movements.

Now we define the callback function. We only need a small modification from our previous example. This time, if it’s the first access, we need to create the map and center it on the device location. Whenever watchPosition() reports any subsquent change to the position, we will use the panTo method from the Google Maps API to re-center the map. We have also zoomed the map a little bit more, so that its movement will be more noticeable.

That’s it, now out you go for a jog and click the link below the grey box to see this thing in action. (Full example code can be downloaded at end of article).

A shortcoming in this example is that although we center the map on the user’s location, the map is not rotated to correspond to the device orientation. The Geolocation API unfortunately does not supply this information. Conveniently though, there is another useful HTML5 API, the Device Orientation API, which can provide such information. We’ll revisit this example in a future article, and we’ll see what happens when we add orientation data into the mix.

As can be seen from the table below Geolocation is widely supported across the main mobile browsers, with the exception of Opera Mini.

It’s also worth noting that in the examples above the code to use the Geolocation API in a webpage was quite simple. The situation is a little more complicated in reality. The value of coupling location-awareness with mobile services has long been acknowledged and a number of handset manufacturers and other organisations have flirted with geolocation support in the browser in the past. This has resulted in various different legacy geolocation implementations. These have included BONDI from the OMTP group, Palm, RIM, and Google Gears, some of which we’ve discussed previously here on mobiForge. If location is to be supported on these devices, then a web application needs to cater for these legacy APIs too.

Thankfully there are a couple of freely (under MIT license) available scripts that have done the hard work to insulate you from the details, including
this script by Stan Wiechers, and this script by Esteban Acosta Villafañe which builds on Wiechers’ script.

Taking a peek inside them, we can see that they check the device browser for support for any of the other legacy implementations as well as the W3C API, thus relieving you, the developer, of some of the drudgery!

That’s it for now on the Geolocation API. Check back soon for the next article in our series, which will cover the Device Orientation API