Fixed navigation bars, or “sticky” navbars, are a very common design pattern. They allow the visitor to access the main site features very quickly since they are always visible, wherever the user is on the site or page. On the other hand, some would argue that they can take up too much space unnecessarily on already space-challenged mobile screens. But we’re not here today to discuss the right or wrong of it—you can read about the pros and cons of fixed navbars elsewhere. If you’re reading this, you’ve probably already decided that you want it, so let’s see how to do it!

What exactly are we trying to achieve?

We simply want a navigation bar that is always visible, stuck to either the top or the bottom of the viewport.

For our fixed navbar, the HTML is pretty simple:

We could also use a <div> or other block element, but we might as well use the HTML5 semantically appropriate element!

Next we need a little CSS:

This gives us a very basic fixed navigation bar. The position:fixed CSS rule is doing the real work. This allows the navbar element to remain fixed on the screen, even during scrolling.

But there are a number of problems with this simple fixed navbar. First, it looks pretty awful! We’ll come back to this. Another problem becomes apparent when we view it on mobile: it looks tiny. 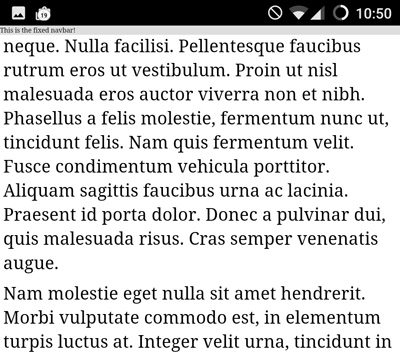 Let’s deal with the issue on mobile first. If we use the viewport meta tag, with width=device-width we can tell the page to display at the screen width, so it will adapt to different devices. Using initial-scale=1 means that the page will be displayed at a scale of 1:1, without any zooming. This will solve the tininess issue. Read more about the viewport meta tag here.

Typically we would want to include a set of navigation links. We could use <ul> and <li> tags for the navigation items:

Since we are using li elements for our menu items, and these default to a vertical listing, we need to add a bit of styling to display them horizontally:

That gets us to here: 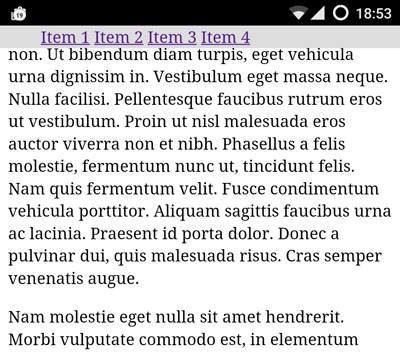 Now let’s try to improve the overall look of it. We’ll set a height for the navbar, and improve the look of the nav item links:

We’ll also update the fixed-nav rules to include a drop shadow and some padding:

And we can remove the unnecessary padding on the ul list:

Finally, it’s common to include a logo in the navbar. We just include the logo image in the HTML…

… and we apply an appropriate vertical alignment: 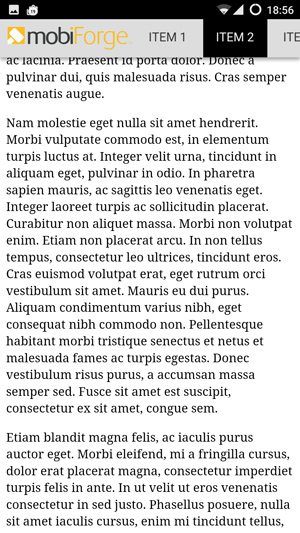 Much better! However, while this is fine for wide viewports, on narrow viewports such as mobile phone screens, there might not be enough space for a horizontal set of navigation links.

In this case, we’ll need to collapse the list at a certain breakpoint, to create what is essentially a responsive menu. Since we want to keep this article focused just on a fixed navigation bar, we’ll cover the responsive hamburger menu in a separate article.

Note that we also need to adjust the drop shadow: 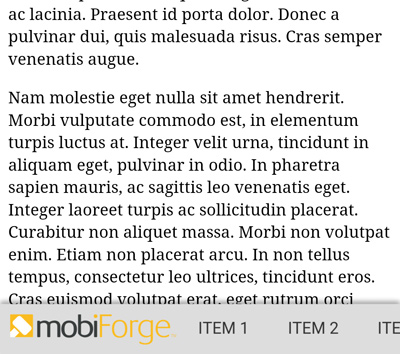 It’s less common to include a logo in a fixed bottom navbar, so you might want to remove that.

Showing and hiding the navbar on scroll

Earlier we mentioned that one of the criticisms of this approach was that the navbar will always take up valuable screen space all the time. Maybe there’s something we can do about this!

The approach is as follows:

The example will use plain JavaScript. It should be easy to adapt for a library such as jQuery if you are already using it.

So, first we find the navbar element and define some variables that we will use later:

Then we attach the handler, and work out how much was scrolled, and where that would leave the navbar:

And finally, we just save the last scroll position so we can work out what way the user scrolled, and by how much, when the next scroll event comes in:

The full code listing for completed fixed top navbar is given below:

And that’s it! In future articles we’ll look at some other navigation design patterns, such as responsive hamburger menus, and animated side navigation menus.