While the latest flagship devices come with at least Full HD screens, it’s the humble 720×1280 that’s getting the largest share of browsing today. This is according to the latest DeviceAtlas Mobile Web Intelligence Report for Q3 2016 which also covers the most used phone makers, mobile OSes, Android versions, and mobile browsers.

The largest screen resolution in a mainstream smartphone is the massive 2160×3840 (4K) screen used by the Sony Xperia Z5 Premium. But even some of the smallest screen resolutions found on feature phones, such as 240×320 or 128×160, generated some website hits in Q3 2016.

It’s a similar picture when it comes to screen sizes. While today large phones dominate in terms of sales, small 4-inch devices are still a widely used category mainly due to the popularity of the iPhone SE and a long lifespan of the 5S.

The newly released DeviceAtlas report includes an analysis of 20 selected local markets from all continents to give you a detailed breakdown of the most popular mobile screen resolutions in use. According to the report:

Interestingly, the largest screen resolution is now growing at the fastest pace. QHD (1440×2560) grew in all 20 countries analyzed in the report with the largest growth in Italy where QHD phones doubled their share of web traffic in 2016. 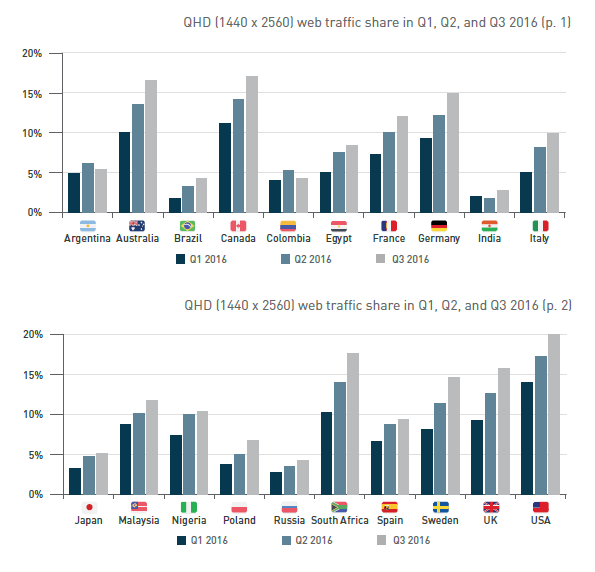 Other mobile stats covered in the report

Mobile operating systems, Android versions, phone makers, and mobile browsers are also covered in the Q3 2016 edition. Here are some of the report’s highlights.

Get your copy of the report