Smartphones are the main way to access websites for a growing number of users, even though the website content is often bloated with images, scripts and ad trackers that aren’t tailored for mobile devices. Google’s Accelerated Mobile Pages (AMP) initiative is aimed to tackle these issues by introducing a set of rules and restrictions for websites sent to mobile devices.

AMP is based on many restrictions

Accelerated Mobile Pages are based on a new framework called AMP HTML aimed to allow building lightweight, rich websites that include text, images, videos and smart ads that load instantaneously on mobile devices.

The initiative is basically yet another optimization technique although it forces developers to follow a set of pre-determined rules and restrictions. AMP decide what can and what can’t be a part of an approved website. For example, no third-party or developer-written JavaScript, external style sheets are not allowed, etc.

It sounds great from a user’s point of view. With AMP users just get what they’re looking for when browsing on-the-go: the content.

You can test AMP sites by entering the following address in your mobile browser: http://g.co/ampdemo

But what does AMP mean for the world of web development? Here’s what Ronan Cremin, the DeviceAtlas CTO, had to say about the latest Google’s initiative:

First off, it clearly helps to speed up load times. The AMP version of The Verge loads about 10x faster for me than the normal version.

Secondly, it’s clearly better than the Facebook Instant Articles initiative because it’s not tied to Facebook. Also, publishers can optionally choose to avail of Google’s free caching and anyone else can implement a caching system if they want.

Many people have commented that all this is a set of limitations and that you don’t need AMP to do this. This is correct, though AMP does use some tricks to render quickly also.

Lots of people have also pointed out that the limitations it imposes are quite draconian, e.g. no JS at all and make the case that JS isn’t necessarily bad, which is true. You can design rich pages that load quickly.

But I do think it has value:

As a user, if I’m presented with an AMP link and a non-AMP link I’ll pick the AMP one without hesitation. The load time issue really is huge. If I remember that a site has opted to implement AMP I’ll be far more likely to visit again. Any time I see theverge.com link I think twice before I click on it.

The troubling aspects of AMP pages:

AMP indicates that the mobile web has a performance problem

It’s not really surprising that Google’s Accelerated Mobile Pages cause controversies especially among web developers and website owners who are wary of being forced to use only one solution that was built and chosen by someone else. Especially given that the company behind AMP is the ‘big G’ who also happen to own the search engine that for many sites is the largest source of traffic. 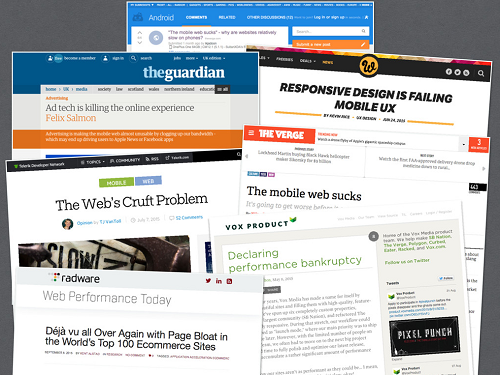 This doesn’t change the fact that the mobile web needs improvements and Google’s Accelerated Mobile Pages’ initiative is a step in the right direction. The initiative clearly indicates that web performance issues need to be addressed in the near future.

What do you make of the Google’s Accelerated Mobile Pages? Let us know in the comment section.