Google’s mobile-first index is rolling out. If you’ve signed up to Google’s Search Console / Webmaster Tools you might already have received a notification “Mobile-first indexing enabled” for http://your-site.com. If you haven’t received the notification, you probably will soon. So, what does it mean?

What is the mobile-first index?

It’s a mobile-centric re-organisation of Google’s search index. Where there is a difference in content between the mobile and desktop versions of a site, the mobile version will now be used as the primary content source for the search index, instead of the desktop, which was the approach up until now.

Google announced the mobile-first index in November 2016, and started to roll it out earlier this year.

How will I know when it happens? 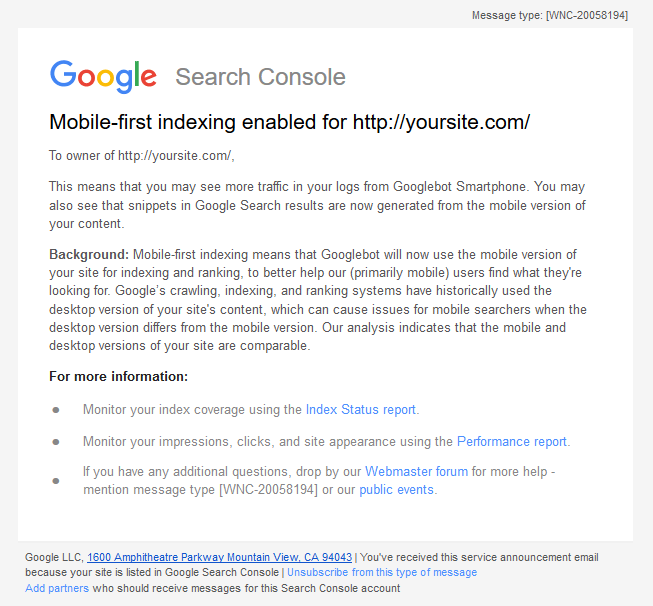 Why is Google doing this?

According to Google, the reason for the change is that the majority of searches are performed on mobile devices these days. If Google continued to use the desktop version of a page to determine relevance of a page for the user, then this can cause a relevance mismatch when showing a mobile page to a mobile user if the mobile page has less, or different content to the desktop page.

What do I need to do?

The simplest advice is to make sure that the same content is available to both your mobile and desktop visitors.

Content here refers to indexable content: text, images, videos. It’s fine for the content to be presented differently, but the meat of a page should be present and accessible in both the mobile and desktop versions.

(You don’t hear much talk about One Web these days, but the idea of content equivalence between mobile and desktop pages is very much in line with the idea of thematic consistency espoused by One Web, way back in 2006!)

What if I don’t have a mobile-optimised site, or have never considered mobile vs desktop traffic?

Don’t worry, Google will still crawl your site and add it to its search index, and it will continue to be ranked. However, there are plenty of reasons why you should be thinking about, and optimising your site for mobile visitors.

On requirements: Neither mobile-friendliness nor a mobile-responsive layout are requirements for mobile-first indexing. Pages without mobile versions still work on mobile, and are usable for indexing. That said, it's about time to move from desktop-only and embrace mobile 🙂

Will it affect my SEO rankings?

Likewise, if you have only a desktop version (i.e. without any mobile optimisation), or only a mobile version, then, again, there is nothing to worry about, Google will index the only version you have.

If you’re not sure what type of site you have, check out this article for a solid description of the various approaches to content adaptation.