Do you remember the dotcom bubble at the turn of the millennium? Even back then, German consumers were able to make payments with their mobile phones. A start-up called Paybox enabled mobile payment transactions that leveraged the German domestic debit system to settle transactions on consumers’ current accounts. All a consumer had to do was add their bank account details as a funding source to the Paybox system.

After the first successes of Paybox a dozen similar copycats driven by dumb money appeared on the German market. Even German mobile network carriers introduced proprietary mobile payment solutions all of which were similar from a functional point of view. As a typical side-effect of the dotcom-hype, all providers truly believed that consumers would enroll and add their bank details to all (more or less similar) payment solutions. And even more irrationally, they believed that merchants would implement 10+ similar payment methods on their checkout pages.

More than a decade has passed since then. Today the payment model is known as the e-wallet and consumers are still asked to add their bank details for Automated Clearing House (ACH) transactions with e-wallets. And the topic of mobile-payments is hot once again. The current market leader is no longer Paybox, but has a pretty similar name: PayPal. Apart from this, history repeats itself.

Although Germany, as Europe’s largest economy, is a major payments market, it can not sustain such a large number of individual solutions. Only one provider, Google, has pulled back again its NFC-based wallet solution that it had previously announced. 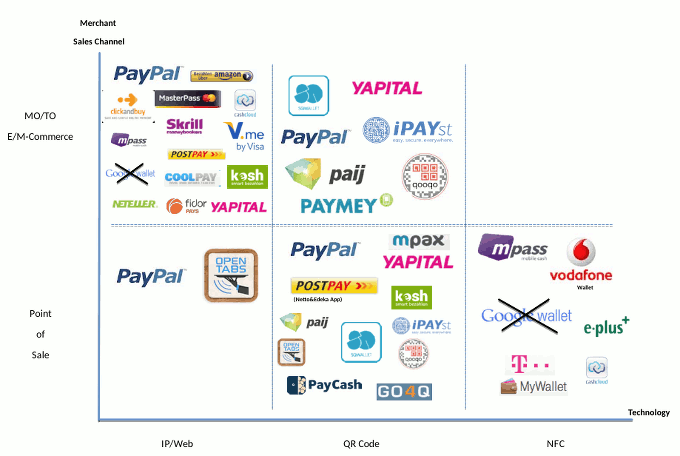 The number of current wallet-payment providers is quite surprising. The Payments market is one dominated by network effects. They lead to monopoly- or oligopoly-structures. We all know those effects from other markets like search engines (Google), Operating Systems (Windows at PCs, Android and iOS at mobile devices), Software (Microsoft’s Office Suite).

Though all those PayPal challengers are running big bets, they also make fundamental mistakes in their strategy. I would like to highlight just a few of them:

Where are the banks?

All the providers mentioned above leverage the existing bank payment systems. Additionally they intermediate the user interface between consumer and bank especially when it comes to payments funded by bank products. Why are the banks not becoming more active in this segment? In fact, they possess solutions to key pieces of the puzzle to be successful:

Currently it does not look like there is a serious challenger to PayPal on the German market, although despite this, the existing competition is always welcome. The banks have all the assets to own this market but appear to have decided not yet to enter.