Last week saw the announcement of the first Android based device, the HTC Dream better known now as the T-Mobile G1. Despite the fact that this phone is based on on Open Source platform, the details as they have been released, make it feel very much like any other smartphone that Joe Consumer can go purchase from his operator. It’s locked to T-Mobile USA at launch and will find its way into the UK in November before it conquers the world in 2009. Now the real question: So what?

Comparisons are oft made between offerings from HTC and others touting similar features on their flagship ‘iPhone’ like devices, or iPhone killer devices, and there are those who still are religiously devoted to what comes out of the doors of Apple: (e.g. the ridiculous iPhone 3G: It’s not world peace, but it’s close. C’mon people, this is a freekin phone… (Funny aside, for the way back machine here. Back at the Unwired Universe conference in 2000, we had a speaker who made the same predictions about WAP and liberating the 3rd world from dictatorships the time…) 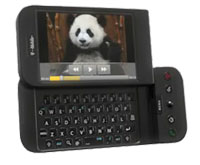 Are people going to line up around the block at T-Mobile stores go get their hands on a G1? According to the Magic 8 Ball ‘My Sources Say No.’ Don’t get me wrong, from all reports this looks like an interesting device here. But when you get down to it, a phone is not just about the software, and not just about the hardware, but how it’s all packaged together, and it’s that combination that Apple manages to routinely knock out of the park.

We’re talking about something that you, I, and the nerd next door will be interested in. I mean, what kind of selling point is it really when the exiting feature touted by the founder of Google is that you can write an Accelerometer app to see how long the phone stays aloft when you toss it in the air? I’m scratching my head on the answer for who the market for this particular device is. It’s got the initial look and feel like it’s targeted for the enterprise, but it’s missing support for MS Exchange (something that even Nokia and Apple provide…). For some reason it reminds me of the Sharp Zaurus 5500 that you could buy at JavaOne 2002…

This is not even the first multi-modal input device for HTC. The Touch Dual (or Tilt for AT&T customers) currently features a touch screen and a full QWERTY keyboard, but sports WindowsMobile 6 as the OS. I really love the moniker that The Register has bestowed up on the G1, and I do think that those who compare this to the iPhone or suggest that we’re looking at an iPhone killer are totally barking up the wrong tree. Clearly Google and HTC are pushing the evolution of the touch interface with the notion of a ‘long press’ to get contextual menus. What this really means for the browsing environment (other than downloading of images) remains to be seen.

Developers and Hackers are bemoaning the closed nature of the iPhone ecosystem and how Apple holds the choke point on application distribution unless you jailbreak your device. For the average Bob on the street, I posit that doesn’t really matter. Sure, maybe they can be draconian about what’s in their AppStore, but I don’t think it will become a real motivator or differentiator for the Google platform to have a more open store. Seriously though, anyone can go out and RockBox their iPod, but what percentage of folks actually do that? (If you know, please do share). The device does it’s job well enough that there’s not really a need to, and the iPhone works the same way.

When asked about the browser, what we’re getting is another ‘WebKit Based’ Browser. It’s not Safari, it’s not Chrome, it’s not the Nokia browser, it’s ‘something else’ yet to be seen. So we’re going to have to hold judgment for a while to see a couple of things:

From the browser that’s shipping with the Android SDK, it is worth noting that the only real differentiator from the Safari UserAgent is the inclusion of Android in the Platform section of the UA String

There is a demo out there from the Android site showing recognition of addresses and phone numbers within the context of the browser with a tie in to Google Maps and the dialer, but we don’t see what’s going on under the hood and if there’s a way to activate these from xhtml, or if it’s just something that’s picked up by the rendering engine automatically.

At this point, until we get hands on the device later this month, I think that the G1 just gets lumped in with the universe of other new and interesting devices that have been hitting the market over the past year since the iPhone launch. Big, shiny touch screen phones from LG, Samsung, HTC, and now even Nokia… I also think that it’s going to be a long while before anyone gives Apple a run for their money in this space. Even if they have better radios, quicker interfaces, full support for Flash, removable batteries, customizable home screens, removable memory cards, or whatever other little irritations that people bitch about on their iPhone. HTC, LG, Samsung, or whomever don’t have the clout or consumer connection to grab control over the whole user experience end to end. The folks over at Apple really know how to market to consumers and own and manage that relationship better than just about any other consumer electronics company out there. Apple also gets software in a way that none of the other phone manufacturers really do. Clearly Google knows the web, and how to build kick ass search and maps, but it still remains to be seen how well that translates into a complete mobile device experience, let alone one implemented by an outside company.

There are really only 2 other companies aside from Apple who maintain complete ownership of their device: Nokia and RIM. Sure, Samsung, LG, Motorola, SonyEricsson, etc… all have their own proprietary RTOS, but when you get down to the larger, touch devices, they often punt and go with Windows. When it comes to the hardware, Motorola has pulled some lovely industrial design out of its hat, but has managed to be series of one hit wonders and our friends at Moto have arguably lost their mojo (that and once you got beyond the polish, the user experience often sucked). The only other company in the space who has a track record of totally nailing consumer experiences is Sony, but they’ve managed to prove themselves as goofy when it comes to software (RootKit on your music anyone?). While I’d not go so far as to say that the G1 is a design by committee device, at the end of the day it’s an HTC phone running Google software with some T-Mobile specific implementations.

Don’t get me wrong, the open software platform on the device is very compelling, but the story here (at least for today) is a downloadable app story, not a browser container story. Flash is still missing from the Android browser at this point in time. If you want to do something fancy pants, you’re going to need to build an app and get it installed. While this may be easier on the Google platform than elsewhere, that also still remains to be seen.

So, what do you do today?

Let me know what you think!