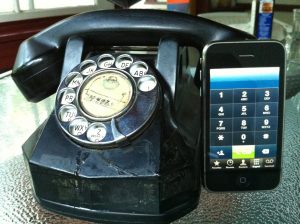 It’s 7 years now since Steve Jobs famously declared war on Flash in an open letter entitled “Thoughts on Flash“. With his knack for prescience, only now is it really looking like it’s lights out for Flash. In response, during the Android Keynote at Google IO 2010, Vic Gundotra cheekily declared that “it turns out on the Internet people use Flash”, that Android would still support Flash, and that it was “much nicer than just saying no”, referring to Apple’s decision not to support it. But, after five years, Flash was officially dropped from the Android platform, and since late 2011, Adobe no longer develops its mobile Flash player:

We will no longer continue to develop Flash Player in the browser to work with new mobile device configurations (chipset, browser, OS version, etc.) following the upcoming release of Flash Player 11.1 for Android and BlackBerry PlayBook.

Fast-forward to July 2017 and Adobe is putting the final nails in the coffin for Flash, albeit fairly slowly:

Yes, Flash is dying a slow, slow death, and will no longer be distributed after 2020.

Pressure had been mounting on Flash from all sides: advertisers, publishers, and browser manufacturers. In 2015 Amazon sounded a death knell for Flash, saying that Flash based ads will no longer be permitted on its platforms from September. Use HTML5 instead, was the company’s advice.

Further woes for Flash came with the news that the Chrome browser would begin to automatically pause Flash based ads from 1st September that year. Google recommended switching to HTML5 (and indeed started to convert Flash ads to HTML5 automatically where possible). So, with Amazon’s ad network also ceasing Flash ads on that day, September 1st 2015 became something of a day of reckoning for Flash, and perhaps a day to be celebrated as a turning point in the history of the web (#FlashBegoneDay). From that day, we all started to see fewer Flash ads in our browsers.

In addition a large group of major news publishers banded together, manifesto-style, urging advertisers to deliver the final death blow to Flash, by moving away from the technology altogether. The letter listed the many benefits of moving to HTML5:

Your opportunity has never been greater. Nearly half of the US population has a mobile phone with internet access, and one out of five pageviews on the web happen on a mobile device – a number that is growing every month.

HTML5 will enable you […] to make your creative ideas captivating on every screen, elevate your brand image, and lower your creative costs.

The letter closed off like this, with the prominence and influence of the participating publishers hard to miss: 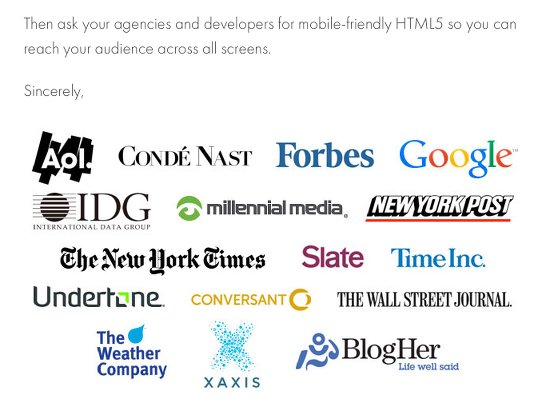 The impact for mobile web can only be positive.

Flash is history! This graph is a wonderful reminder of how HTML5 has grown over the past decade, and why Flash is no longer needed. HTML5-capable devices are everywhere; the devices are ready, people!