Bluetooth beacons have always been an alluring prospect for developers. Small, cheap and with a long battery life, they brim with potential save for one fatal flaw: they generally require users to have an app installed on their device to be noticed. Without a beacon-aware app, their presence generally goes unnoticed entirely.

This status has changed recently with the advent of beacon support in two popular browsers, Chrome for iOS and Opera. Both browsers now feature beacon scanners utilising Google’s Eddystone standard (as opposed to Apple’s iBeacon), though the implementation differs considerably.

Interestingly, Google chose to implement beacons in Chrome for iOS before doing so in the Android version. Why this is the case is not entirely clear but one potential explanation is that beacons will be implemented in Android itself, thus removing the need to add to the browser.

Let’s have a look at how beacon support has been added in each case. Both browsers take quite different approaches to the problem.

Chrome for iOS takes the approach of integrating with the iOS “Today” view, using this notification panel as a way to display local beacons to the user. This approach works well since it means that users don’t need to have Chrome running to see notifications. On the negative side, this approach does require that the user explicitly adds Chrome to the apps in the Today view. Bluetooth scanning has been available in Chrome for iOS since July. 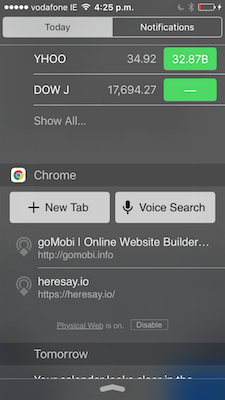 Opera on the other hand defaults to displaying a “Nearby” tab on startup. On this tab it shows both nearby Bluetooth beacons as well as geographically relevant sites from other sources. For now, Opera support is limited to their Opera Labs release, released on October 8th 2015. 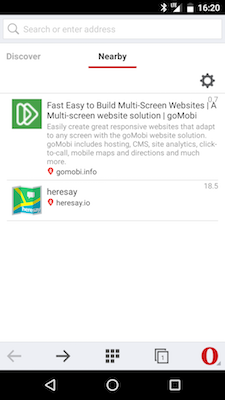 Opera highlights physical web beacons in its Nearby tab

Overall though, inclusion of Bluetooth beacon functionality by two major browsers signals a big step forward in adoption, and a step that others are sure to follow—it seems near certain that beacon support will come soon either to Chrome on Android or to Android itself. Facebook is already offering bluetooth beacons free of charge to businesses that request them. Watch for support spreading to other apps soon. Readers keen on learning some of the imagined use cases should read Stephanie Rieger’s Medium essay on the physical web.