Unless you have been hiding in the caves for the past couple of months, by now you must have heard of the mobile platform from Google that everyone is talking about. Yes, that’s right, I am talking about Android. Android is an open source mobile operating system that is based on the Linux kernel. Using Android, device manufacturers can customize the OS to suit their particular hardware design, thereby allowing them to innovate without limitations. For developers, Android programming uses the Java programming language, and familiarity with the language immediately opens the platform to every Java programmer in the world.

In this inaugural article of the Android series, I will get you started with Android development without requiring you to wade through pages of technical documentation. At the end of this article, you will have written a simple Android application and you will be able to deploy the application onto an emulator or a real Android device.

So, what are you waiting for? Strap on your seat belt and let the fun begin!

What you need to develop for Android?

Developing for Android is not expensive. All you need is a Mac, or a PC that runs Windows or Linux. For this article, I will use a PC running Windows XP.

The Android SDK is available for free at: http://developer.android.com/sdk/1.1_r1/index.html. At the time of writing, the latest version of the Android SDK is Version 1.1 Release 1. The Android SDK comes with all the tools and APIs you need to write and debug your Android applications. It also includes the Android Emulator, allowing you to test most of your applications without needing a real device. Obviously, for some applications (such as those using the hardware of an Android device like camera, Bluetooth, etc) you would need a real device and the emulator will not fit the bill. As far as real devices are concerned, for developers outside the US the only choice at the moment is to buy the Android Dev Phone 1 (see http://code.google.com/android/dev-devices.html), which costs US$399 (plus a US$25 registration fee for the Android Market).

For developing Android applications, you can use the Eclipse IDE (download free here). Once the Eclipse IDE is installed, you need to install a custom plug-in called the Android Development Tools (ADT). This tool adds Android project support in Eclipse and should be downloaded and installed by all Android developers. For detailed instructions on how to obtain and configure the ADT plug-in in Eclipse, see http://developer.android.com/sdk/1.1_r1/installing.html.

So, here is the summary of the steps you need to perform in order to start developing Android applications:

With all the tools and SDKs setup, you are now ready to embark on the journey to Android nirvana! With Eclipse powered up, let’s create a new Android application.

In Eclipse, create a new Android project and name it as shown in Figure 1. 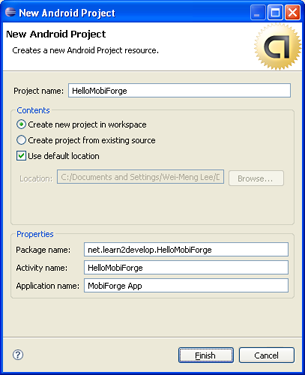 Take note of the various fields you need to supply when you create a new Android project:

When the project is created, the Package Explorer in Eclipse will show the project and its components (see Figure 2). 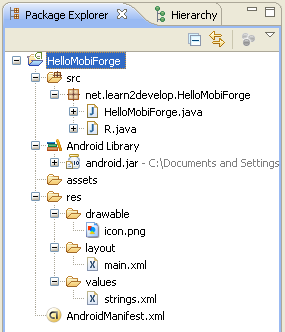 Don’t let the number of items in the project scare you – they are actually very straight forward.

First, the src folder contains your Java source files. The HelloMobiForge.java file is the source file for the HelloMobiForge activity you specified when you created the project earlier. The R.java file is a special file generated by the ADT to keep track of all the names of views, constants, etc, used in your Android project. You should not modify the content of this file as its content is generated automatically by the ADT.

The Android Library contains a file named android.jar. This file contains all the classes that you would use to program an Android application.

Modifying the UI of the Application

Let’s now modify the UI of our application so that you can do some useful work. Recall earlier that you had an activity named HelloMobiForge? Double-click on the HelloMobiForge.java file in the Package Explorer to view its content. You should see the following:

Notice that the HelloMobiForge class extends the Activity class. When the activity is loaded, the onCreate() event handler is called. The activity loads its UI from the XML file named main.xml. This is represented by the constant named R.layout.main (generated automatically by the Eclipse as you save your project). If you examine the main.xml file located in the res/layout folder, you should see the figure shown in Figure 3. 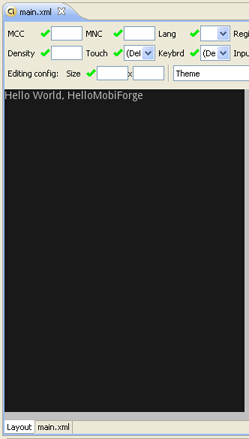 If you click in the main.xml tab located at the bottom, you will see the following:

In Android, the UI of each activity is represented using various objects known as Views. You can create a view using code, or more simply through the use of an XML file. In this case, the UI Is represented using an XML file. The element represents a text label on the screen while the element specifies how views should be arranged. Notice that the element has an attribute named android:text with its value set to “@string/hello“. The @string/hello refers to the string named hello defined in the strings.xml file in the res/values folder. If you examine the strings.xml file, you should see the following (click on the strings.xml tab at the bottom of the screen):

Let’s now modify the main.xml file a little just to have a feel of programming Android. Add the following element:

This basically adds a button view to the UI. If you switch to the Layout mode, you should see the button as shown in Figure 4. 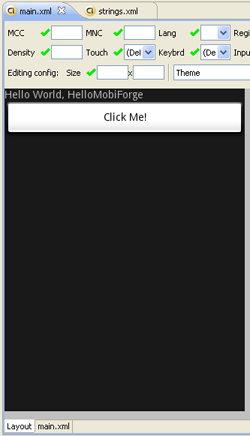 Having the button by itself is not very useful – it should do something useful when it is clicked. Hence, you will modify the HelloMobiForge.java file so that when the button is clicked, it will do something:

In the above code, when the Button view is clicked, it will display a message using the Toast class. The Toast class is a helper class that displays a message box on the screen.

To test the application, press F11 in Eclipse. The first time you do so, you should see an error message. Press F11 again and you should see the dialog shown in Figure 5. Select the Android Application option and click OK.

Figure 5 Selecting the ways to debug the application

By default, if there is no real Android device connected to your computer, Eclipse will start the Android Emulator and deploy the application onto the emulator.

After a while, you should see the application on the emulator. Click on the Click Me! button and observe what happens (see Figure 6). 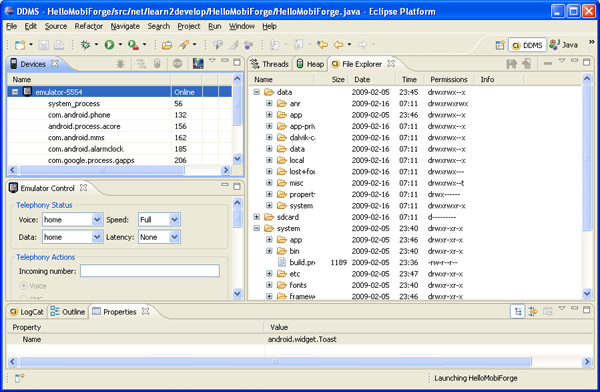 Figure 6 Testing the application on the Android emulator

The ADT plug-in in Eclipse provides some useful tools to control your Android Emulator. In Eclipse, click on the Open Perspective button and select DDMS (see Figure 7). 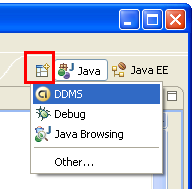 Figure 8 The different tools in DDMS

Figure 9 shows that the application that you have just deployed are stored in the /data/app/ folder of the emulator. The .apk extension of an Android application stands for “Android Package”.

Figure 9 Viewing the apk file on the emulator

If you have a real Android device, simply connect it to the computer running Eclipse. Eclipse will recognize your device and display it in the Devices tab of the DDMS perspective (see Figure 10). 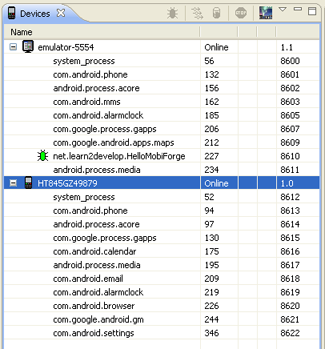 If you now press F11 in Eclipse, Eclipse will prompt you to select the target device for debugging (see Figure 11). 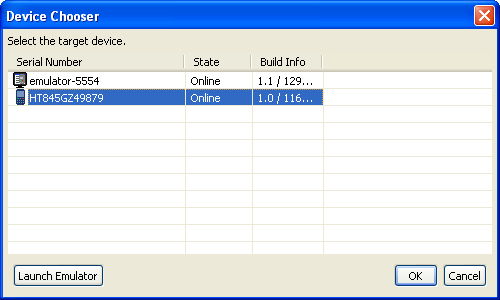 Figure 11 Selecting a device for deployment 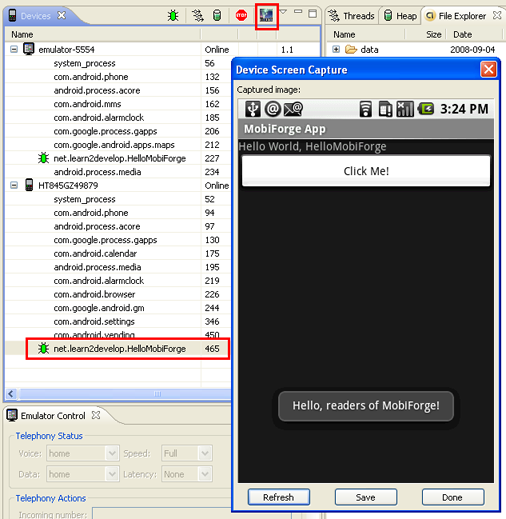 Figure 12 Capturing a screen shot from the device 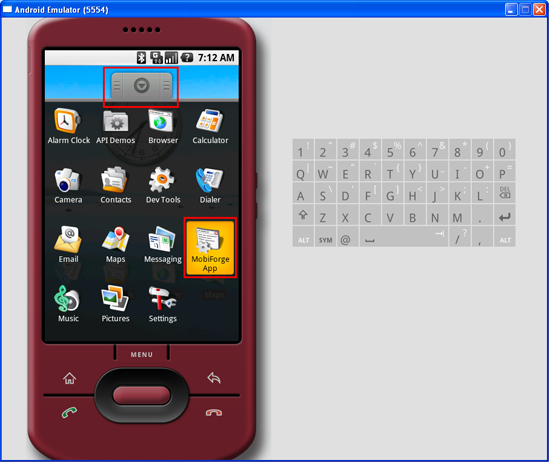 In this article, you’ve had a whirlwind tour of how to develop an Android application. While the application that you had created does not do much, it does allow you to get a feel for Android programming. Give it a try and let us know how it works for you. Leave your comments below, or contact the author. If you are ready for more Android programming, watch out for the next article in this series, where we will discuss activities in more details. See you then!