Overwhelmed by service workers? Here’s a collection of tools and libraries that will help tame this powerful beast!

Offline-first, fast, with the sw-precache module is the tagline of the Google-built sw-precache library. It’s a module that integrates with your gulp or Grunt build process: sw-precache will generate a list of versioned resources for you, as well as a service worker that will cache and serve these resources.

If you’re using gulp or Grunt, then sw-precache is a no-brainer! But even if you’re not, there’s a command line interface for sw-precache that you can use instead.

The gulp task code below will generate a service worker that caches all images, JavaScript, HTML and CSS files.

You now have a gulp task that you can run with:

If you don’t use gulp or Grunt, you can use the command line interface. To cache just HTML files, for example, you would use:

The Service Worker Toolbox, also known as sw-toolbox, is another library from Google that offers a variety of wrappers for simplifying the most common service worker tasks such as:

These are all powerful features, but can be tricky to implement correctly by hand.

To include the toolbox in your service worker, simply use importScript:

You can register service workers in the usual way, or with an HTML include:

There is strong support for routing, the mapping of URL requests and methods to handlers. The example below shows basic routing, with a URL being mapped to the built-in toolbox.networkFirst handler.

The bundled elements are:

Polymer code to show how to register and set up a custom fetch handler might look like this. Note that promise handling with respect to registration options is managed for you:

The Polymer service worker elements are built on top of the sw-toolbox library mentioned earlier.

Recipes include some of the most common service worker use cases, such as caching and offline patterns, as well as several web push notification patterns, an API analytics, and load balancer demos. 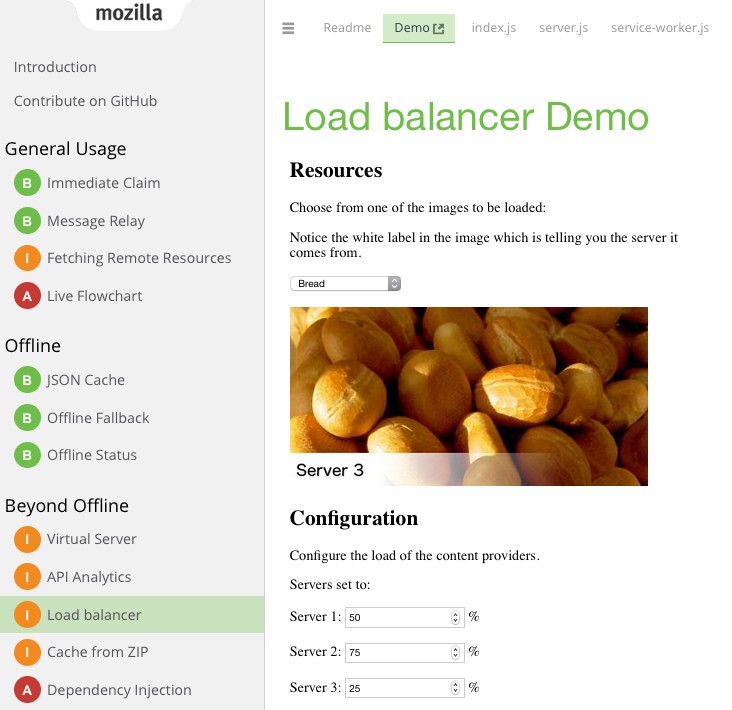 UpUp is an open source project that builds on service workers to provide an easy-to-use API for providing offline content. UpUp detects when the network is not available, and delivers offline content instead. To use it, you need to add its two files to your website, upup.min.js and upup.sw.min.js. Then all that’s left is to declare which resources should be available offline.

After adding the two files mentioned above, you need to specify what resources should be available offline, using the UpUp.start method. The most simple use case is to show a simple offline page, instead the browser’s default offline page:

As the library’s developer points out, there is nothing stopping you from developing rich offline experiences, even tailored for individual users, or making use of a framework to deliver its experience:

This plugin integrates with webpack to provide offline experiences using service workers with appcache fallback. It provides a rich set of configuration options to tweak what should be cached, how things should be cached, as well as scoping, and cache invalidation strategies.

To use this plugin, you first instantiate and set some options in your webpack.config

Then you include and install in your client script with the following:

If you know of a library or service that we’ve left out, let us know and we’ll add it!