These following screenshots, taken at the approximate resolution of
the real device, show how facebook.com looks on a range of popular
phones. You
can browse the
device properties on DeviceAtlas
here: iPhone, BlackBerry
Curve, Nokia 6300.
For convenience
I’m using the 320×480 resolution of the first 3 generations of iPhone
here, not the 480×960 screen of the iPhone 4 and 4S.

The following table shows some of the key differences between the
different
versions of the Facebook “Home” page served to different devices after
logging into facebook.com. I’ve also included the “Simplified Site”
that Facebook links from the lower-end templates.

* On capable devices Facebook use local storage to do some caching,
so this figure isn’t directly comparable to the others. On my test
device the the size of the local storage database was about 50Kb, but
this depends quite a bit on what’s happening in your Facebook timeline.

Again, as with my analysis of Google’s mobile web experience,
Facebook serves an entirely
different HTML document
to each device that I emulated. Unlike Google, whose simple-looking
home page makes it more viable to present a uniform face across
different
devices, Facebook’s Home page looks quite different in each case,
despite keeping much the same content and functionality intact.
Facebook adapts both the styling and the content to ensure a reasonable
experience on each device.

Where Google appears to fine tune the experience as far as possible
on the server side, Facebook uses a more nuanced strategy for their
adaptation, utilizing two distinct tiers in their mobile adaptation,
each with a different approach.

At the high end, for devices running WebKit-based browsers, FaceBook
uses one design
that adapts itself to the particular device in question, client-side.
This
experience is visually rich and uses extensive JavaScript to add
functionality such as the familiar slide-in menu on the left and
various AJAX
niceties. JavaScript is used to calculate usable screen dimensions
and analyzes the device’s User-Agent string in
the process. Interestingly, the usable screen dimension calculations
explicitly look for “iPhone”, “iPad” and “Android” in the user agent
string, but not “iPod”. This richer version of the interface also makes
extensive use of
HTML5 features such as data attributes and adds meta tags to
control the viewport and reference the Apple touch icon for bookmarking
the site on the desktop.

For other classes of device, Facebook uses server-side device
detection to send a packaged experience to each device, with no
client-side code required. As with Google,
the package of HTML and CSS is quite finely tuned to the device in
question, though not without some apparent oversights. Facebook alters
the
pages in three significant ways depending on the device:

Facebook uses essentially no JavaScript at all for most lower end
devices, save for a couple of onload() envents. No media queries are
used in any version of the mobile web interface.

Helpfully, Facebook offers a link to a “Simplified Site” for users
who are experiencing difficulties with the version of the site served
by default. This version dispenses with pretty much everything except
for plain text elements. This version seems to have taken the place of
lite.facebook.com, which is no longer supported. 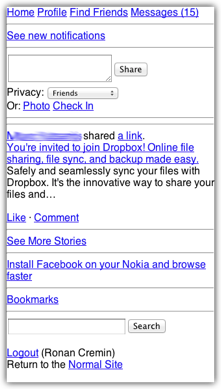 Overall, as with Google, there is a huge difference in between the
pages delivered to the high-end and low end devices. In terms of page
weight, the difference is roughly a factor of 10 but the complexity of the pages is greatly
altered too, presumably an acknowledgement of the limited CPU resources
available on lesser devices. This is a real issue—even the very
simplified site takes about 10s to render on a Nokia 6300. Perhaps the
best way to visualize the complexity
difference is with a 3D rendered view of the DOM (finally a use for
this Firefox feature!). Note the vastly more complex layout used for
WebKit browsers (the number of layers corresponds to the depth of
nesting of HTML elements).

Facebook serve a 450 line, 61Kb CSS (8Kb compressed) to the Nokia
6300
despite the fact that few of the selectors defined in it are utilized
anywhere. This imposes a big burden on a device such as the lowly
Nokia—the CSS needs to be loaded and parsed regardless of whether it is
used or not. According to the CSS
Usage Firefox add-on, out of a whopping 488 selectors in the linked
CSS files, only 13 are referenced in the HTML of the Facebook home
page. It is likely that some of the additional selectors are used on
other pages of the site, but almost certainly not all of the remaining
475. The situation is similar with Facebook’s “Simplified Site” where
the linked CSS file is 2-3 times bigger than the entire payload of the
page, despite being almost completely unused.

Facebook use XHTML Mobile Profile for all devices, which sounds OK
except that for the WebKit version of the site multiple HTML5 features
are used, none of which are strictly compatible with the doctype.
Partially as a result of this, Facebook’s pages do very poorly when run
through the W3C Validator—the
WebKit version of the page generates 283 errors and 41 warnings.

Another interesting oversight is Facebook’s usage of HTML5 local
storage—an iframe is used to frame a minimal page running storage
related functions, which is all well and good, but serving this to a
Nokia 6300 is optimistic to say the least, though the device does
actually support iframes.

So what are the lessons to be learned here? The main learning here
is that are multiple ways to achieve this goal of delivering a mobile
web experience. In contrast to Google, Facebook
have opted to use a combination of server-side adaptation coupled with
client-side logic, where appropriate. This is a nice mix of
techniques: the pure server-side approach lets you deliver a pre-canned
experience to devices that aren’t capable of running code themselves;
the hybrid approach lets you harness some of the capabilities of higher
end devices, and also to utilize some real time properties such as
device orientation and usable screen width. This lets Facebook achieve
the the goal of delivering a rich app-like experience to high-end
devices, while also delivering a useful experience to low-end devices,
with no sacrifice of core functionality. This strategy also fits nicely
with Facebook’s native app strategy, which uses an HTML5  is
wrapped into a native app.

In order to probe a website to see if it delivers different user
experiences for different mobile devices you need to replicate the HTTP
headers sent by the real device as far as possible. These headers are
used by sites to determine the best content to return in response to
the device’s request. The most important of these headers is the
User-Agent header but to fully replicate a real device you need to send
other headers also, since sites may have adapation logic that triggers
on these too. Apart from the User-Agent header, the most significant
headers are the Accept and x-wap-profile.

For this article I used the headers from an iPhone, a BlackBerry
Curve and a Nokia 6300,
since these devices are all very popular and represent a wide range of
device capabilities.

The page I did all the analysis on is the Facebook “Home” page,
since this is probably the best indicator of how the rest of the site
is built.