The increasing trend towards screening out ads from web content using browser extensions or apps has hit the mainstream since Apple added support for Ad blockers in iOS9. Up until then, while possible, it was less straightforward to block ads on Apple’s Safari browser for iPhones and iPads.

Since the iOS9 release, the popularity of ad blocking apps has soared, with some 600,000 downloads from the App Store the first week alone. While ad blocking apps have since slid down the app charts, Apple’s change has served to propel ad blocking technology into the limelight.

Why is it important?

The vast majority of content publishers on the internet are ad supported. Advertising is the de facto currency of the web. Publishers create content for their audiences, who can then be monetized by displaying relevant advertising to them. If there is no advertising revenue there is no ‘free’ content.

Given many of these apps are paid for, it seems that content publishers who rely on ad revenue are suffering a double blow: loss of ad revenues as advertisers potentially run for the hills and the irony of people paying to screen out ads rather than paying for (ad-free) content.

Much has been said about the ethical and moral implications of blocking ad content which ultimately pays for content in a free-to-web model: those who screen out ad content are basically trying to have their cake and eat it. If publishers cannot fund their content with advertising, then they are either out of business unless they can find other ways of making their content pay. Content owners will either be forced to charge for the content through paywalls, find different ways of inserting ads into content, or fight a technology battle with the ad blockers.

With Google’s Head of Search, Amit Singhal announcing that 2015 saw more searches from mobile than desktop for the first time, you can understand just how much is at stake.

The multi-billion dollar ad industry stands to lose much in an internet world where ads are screened out. It is unlikely to stand by if ad blocking threatens to erode the value of the ad ecosystem. We are already seeing the first shots being fired in a war to control access to the end user. According to a recent report from UBS, ad blocking technology could cost content publishers some US$1 billion. Adobe and Pagefair – who develop counter ad blocking software – put the potential losses as high as $22 billion, estimating that there are some 200 million users of ad blocking technology.

Earlier this month one of the internet’s largest desktop ad blocking extensions, AdBlock who count some 40 million users, announced that it will stop blocking ads that are part of the Acceptable Ads program. Founder Micheal Gundlach also announced that he was selling the company. The buyer has not been named. 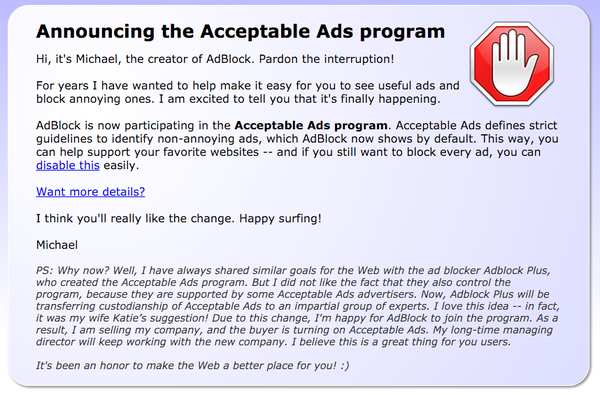 The Acceptable Ads program is a whitelist of ads deemed non-annoying and championed by AdBlock Plus, a rival ad blocking extension.

The manifesto for acceptable ads contains the following principles:

The company behind Ad Block Plus, EyeO have a developed a framework for deciding how ads meet these criteria. Based on their own research they say the majority of users understand the symbiotic relationship between free content and advertising, and only a minority want to completely screen out advertising.
Earlier this year the Finanacial Times revealed that many of the major players in the online ad industry (Google, Microsoft, Amazon, Taboola) had paid arrangements with Adblock Plus to be part of their whitelist.

According to Ad Block Plus founder Wladimir Palant,

“Killing websites isn’t the goal, making them use good advertising practices is.”

Which brings us to a deeper question:

Why do people want to ad block?

To paraphrase the real estate agents; performance, performance, performance. Such is the quantity of data and bandwidth attributable to advertising, that load times are significantly quicker without the overhead of loading additional images, tracking scripts, and waiting for multiple external requests to render. And like a mansion in a bad part of town, a flashy website is literally not worth the page loading wait times in a mobile context. The complex set of dependencies on ad networks, ad servers, exchanges and all the attendant bandwidth and processing cycle demands just do not make for a high performance web.

A recent experiment by the New York Times on 50 popular news sites, showed that about 50% of data being served was advertising. It also demonstrated just how much quicker websites are to load when an ad blocker is employed.

With the highly variable nature of cellular connections, often contended public WiFi networks, and the cost of data plans, it’s not hard to see why ad blockers are so attractive. Add to that the plain old disruptive nature of display advertising and concerns about privacy, and you have potentially widespread adoption of ad blockers.

Of course concerns around privacy and behavioral profiling, exist outside of the context of adserving. In practice web traffic analysis and tracking is so commonplace that users who are blocking ads for privacy reasons alone would need to employ more than just ad blockers.

Google’s Accelerated Mobile Pages (AMP) project enters the fray to deliver faster pages by simplifying the HTML code and removing the JavaScript. Supported by a range of top web publishers including Twitter, LinkedIn and the BBC, the framework requires developers to work with a subset of HTML and CSS that leaves out things like transitions and animations. An AMP JavaScript library gives access to elements like carousels, embedded tweets, videos and lightboxes that have been optimized for speed, and validates the code.

The GitHub page for AMP gives a more stringent set of objectives under the Performance heading:

Predictable performance is a key design goal for AMP HTML Primarily we are aiming at reducing the time until the content of a page can be consumed / used by the user. In concrete terms this means that:

We can make the web great again

AMP certainly does seem to work. In our own tests we found that the Verge’s mobile web sucking pages got faster by a factor of 10.

AMP’s objectives are uncannily similar to those of the Acceptable Ads program. And most recently IAB have also responded to the performance imperative, with their LEAN (Light, Encrypted, Ad choice supported, Non-invasive ads) initiative. 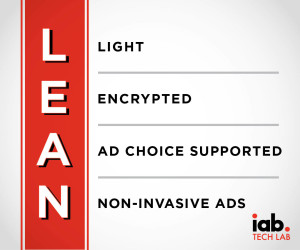 Introducing the initiative, Scott Cunningham of the IAB admits the ad industry’s shortsightedness and issues a mea culpa on its behalf:

“We messed up…The rise of ad blocking poses a threat to the internet and could potentially drive users to an enclosed platform world dominated by a few companies. We have let the fine equilibrium of content, commerce, and technology get out of balance in the open web. ”

It’s probably worth pointing out that ad avoidance isn’t really anything new, it’s just part of an evolution of the advertising medium that mirrors things that have already happened in other areas such as video or Tivos in TV advertising. For each successive wave of technology that allows ads to be ignored, the ad industry must adapt. Whether that’s through openly combative measures, such as technology to circumvent ad blockers, to more innovative methods to reach consumers online, such as sponsored content, native advertising, product placement, which all work outside of the context of display advertising.

So while it seems unlikely that ad blockers will usher in an era of advertising free web content, it seems certain that we are seeing a renewed emphasis on performance on the web.