In a recent blog post that I did here on mobiForge (Server-side
device detection used by 82% of Alexa top 100 sites) some people
expressed surprise that a 47 byte difference in the HTML payload
delivered by Google to different devices constituted a significant
level of
server-side adaptation. On checking my results, it turned out that this
minor 47
byte file size difference actually masks an entirely different HTML
document served to
different devices—an approach that Google use extensively in its mobile
presences.

This discussion led us to understand that people probably don’t realise
just how extensively server-side adaptation is used by the major
internet brands in order to fine-tune the user experience for each
platform. To help
shine a
light on this I’m going to look at the approaches that some major
brands use in
delivering their mobile web experiences. First up, it’s Google.

These following screenshots, taken at the approximate resolution of
the real
device, show how google.com looks on three popular phones. You can
browse the
device properties on DeviceAtlas
here: iPhone, BlackBerry
Curve, Nokia 6300.
For convenience
I’m using the 320×480 resolution of the first 3 generations of iPhone
here, not the 640×960 screen of the iPhone 4 and 4s. 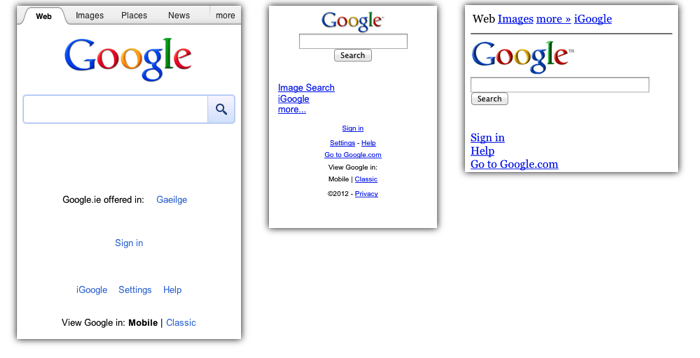 The following table shows some of the key differences between the
different
versions of the same page served up to different devices on visiting
google.com. In my particular case I get redirected to google.ie since
I’m based in Ireland but the
same approach is used across all of the Google entry points for each
geographic region.

The first point to note here is that Google serves an entirely different HTML document
to each device that I emulated—the superficially
similar pages that we see on google.com are in fact radically altered
depending on
the device you’re holding. Google changes essentially every aspect of
the HTML and
its delivery to ensure a good experience. At a very basic level, the
pages
are cosmetically altered (logo resizing etc.) to fit the device
perfectly but in fact the
adaptation goes much deeper than that: Google change the very document
type delivered,
whether or not compression is utilized in its delivery, the extent to
which CSS and
JavaScript are utilized, CSS vendor prefixes and so on. The range of adaption is impressive in its
scope—Google
go far beyond merely fitting everything onto the screen. The iPhone
version of their homepage is about 30 times heavier than the version
they serve to
lower devices, even with GZIP compression. On iOS and Android extensive
JavaScript is utilized to
give
type-ahead searching, CSS is used to make things look pretty. On lower
end versions
of the same page all of this is jettisoned to ensure that the page is
delivered sufficiently quickly, but the core functionality and basic
look and
feel are retained.

This extensive server-side adaptation continues once you are served
a set of search results, though at this point some of the differences
become
more visible. Google presents a much richer set of results for iOS and
Android phones than it does for the Nokia 6300 and BlackBerry.
Disappointingly, Google chooses not to include a tel: link for the
Nokia and Blackberry, even though both devices support this feature
just as well as Android and iOS.

So what are the lessons to be learned here? The first point is that
delivering an optimum mobile experience to a wide range of devices
requires some tuning to match the document served with the device
making the request—cosmetic rearrangements of elements on the page
alone does
not pass muster.

Secondly, this level of device adaptation is
impossible to achieve after the fact on the client side, with the same
base
HTML document
presented to each device—many of the decisions that Google have made
here require server-side adaptation. This ability to cater for a much
wider range of devices is unique to server-side adaptation, because
only
what is strictly needed for each type of device need be sent.

Finally, in keeping with Google’s philosophy of delivering
experiences
as fast as possible, all of the heavy lifting for this adaptation is
done server-side before anything is delivered to the client—no
additional client-side code or queries are required to run before the
user sees the rendered page.

In order to probe a website to see if it delivers different user
experiences for different mobile devices you need to replicate the HTTP
headers sent by the real device as far as possible. These headers are
used by sites to determine the best content to return in response to
the device’s request. The most important of these headers is the
User-Agent header but to fully replicate a real device you need to send
other headers also, since sites may have adaptation logic that triggers
on these too. Apart from the User-Agent header, the most significant
headers are the Accept and x-wap-profile.

For this article I used the headers from an iPhone, a BlackBerry
Curve and a Nokia 6300,
since these devices are all very popular and represent a wide spread of
device capabilities.

In all cases I was not logged into Google and I stripped all cookies
to ensure each device was treated individually.