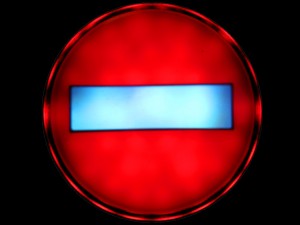 As we continue into 2016, the ad-blocking saga shows no sign of abating, with a number of recent developments.

This latest round of controversy kicked off late last month when Samsung included an ad-blocking feature in the latest version of its Internet for Android browser. It didn’t stop there though. Also included in this update was an iOS-style ad-blocking API extension, the Content Blocking API, which allows third-party developers to create standalone ad-blocking apps for its browser. 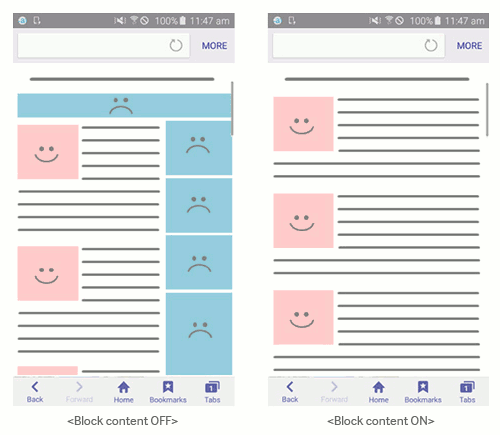 Within a couple of days, Google had started booting any third-party apps that used the API out of the Play Store, citing section 4.4 of its T&Cs:

4.4 Prohibited Actions. You agree that you will not engage in any activity with the Market, including the development or distribution of Products, that interferes with, disrupts, damages, or accesses in an unauthorized manner the devices, servers, networks, or other properties or services of any third party including, but not limited to, Android users, Google or any mobile network operator. You may not use customer information obtained from the Market to sell or distribute Products outside of the Market.

By banning these apps, it appeared that Google was taking a stand against ad-blocking on its platform, at least when distributed as standalone apps. When contacted, a spokesperson for the company stated that its policies were designed to provide a great experience for users and developers. Two of the affected apps, Adblock Fast, and Crystal, both had updates rejected by the Play Store app reviewers, and the developers of both were directed to the same section of the T&Cs.

Then, the next twist in this strange episode: on appeal by the developers of both Adblock Fast and Crystal, Google flip-flopped and reversed the decision to block them, and both were reinstated to the Play Store.

This short controversy perhaps highlights Google’s discomfort and uncertainty with the new reality of ad-blocking on mobile. Was it a misunderstanding by Play Store reviewers, or a knee-jerk reaction to a new threat, that got these apps temporarily booted out? Android, as an (allegedly) open platform encourages interaction between apps. So it seems unlikely that this was ever just about apps interfering with each other, since these apps “interfere” with each other in an authorized way. If it was intentional, Google certainly overreached on 4.4; it’s hard to see how a plugin designed specifically for a browser “interferes with, disrupts, damages, or accesses in an unauthorized manner the devices, servers, networks, or other properties or services of any third party”.

It’s possible that Google has shown its internal anguish, more so than it wished to, with this volte-face. It seems likely now that it considers ad blockers to be an existential threat and has gifted this knowledge to all of its competitors. If this was a game of poker a tiny bead of sweat has just shown on Google’s brow; a facial muscle has twitched!

A further bizarre aspect of this whole affair is how Android was momentarily looking like the OS that didn’t let you tinker, while the traditionally locked-down iOS looked to be the more open platform. Perhaps another take away from all of this is that Android is open… so long as you don’t threaten the Google business model.

All of this begs another question: If ad blocking comes to all the other browsers on Android, will we ever see an ad blocker in Chrome for Android? It would be hard to defend not having one, in such a scenario. There is a clear demand for this functionality; not having it could leave Chrome trailing in this area.

(Update 30 May 2016) In another development, Opera has just announced that its Opera for Android browser (beta version) now includes ad-blocking. This functionality is part of itsData savings feature, and is disabled by default. Data savings in Opera is basically an Opera proxy server that compresses page elements such as images and videos on the fly, to reduce the amount of data sent to the device for a webpage. Considering the amount of data bloat caused by web ads, this is a natural place to house this functionality.

Now there is a new option Block ads under the Data savings settings: 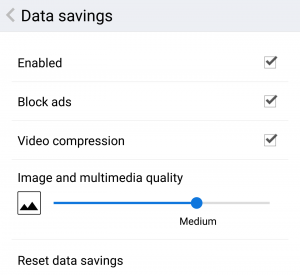 This now puts further pressure on Google Chrome: can it afford to omit ad-blocking from its own browser?

Last week also saw the advancement of plans by Three UK’s trial of network level ad filtering tech. In 2015, several UK ISPs announced they were experimenting with the network filtering technology from Israel’s Shine startup, and it looks like plans have been progressing, with a trial set for the week of June 13th 2016. Interestingly, in a win for the end user, the technology is being deployed as an opt-in service.

Three UK might also have given us a glimpse of where they are headed with this tech, with Tom Malleschitz, Three U.K.’s Chief Marketing Officer, stating

As we noted in our State of the Web article, this story is not over yet, but Apple is looking pretty smart right now!