We’ve written extensively on mobiForge on how web performance on mobile devices really makes a huge difference to your visitors and your business. We’ve also highlighted that the fast metropolitan WiFi speeds enjoyed in the offices of many content creators simply aren’t reflected in the real world where the vagaries of the network and the device often conspire against you and your visitors.

And so, an investigation of how an entire industry sector – news websites – that should live or die by their performance metrics, sounds like an interesting proposition. To that end, an interesting report, just published by DeviceAtlas looks at how some of the world’s top news sites perform on mobile based on a number of different factors including page weight and time to interactive.

The report takes 50 household media brands from around the world and tests their website using a combination of Google’s Lighthouse tool which measures how long a site takes to be interactive, or usable by a visitor, and page weight based on mobiReady, a tool to measure mobile friendliness and page weight in particular across low, mid and high end smartphones.

The testing conditions employed included performing several loads of each website on an emulated Nexus 5X using a 1.5 Mb/s network, which roughly equates to a good 3G connection. At this point it is worth recalling the 3G speeds are still not a reality in many parts of the world (including the western world) and that the spectrum of device capabilities remains very wide indeed. With these caveats in mind, these testing assumptions sound quite generous.

The main results show that many websites struggle to stay below the 3 second threshold. In fact the average time to interactive on mobile was a whopping 10.5 seconds. That is over 3 times longer than recent Doubleclick research shows to be the tipping point for abandonment rate.  Anything over 3 seconds and you stand to lose 53% of your visitors. This is a point that bears repeating:

Over half your visitors will move on from your site if it takes longer than 3 seconds to load.

The best performing site, Die Welt clocked in at just 2.15 seconds. At the slow end of the spectrum, the worst performing site measured had an unbelievable load time of 22.38 seconds. This is probably longer than it takes to recite the alphabet, or a prayer, should any sane user stick around that long for the content to show up. 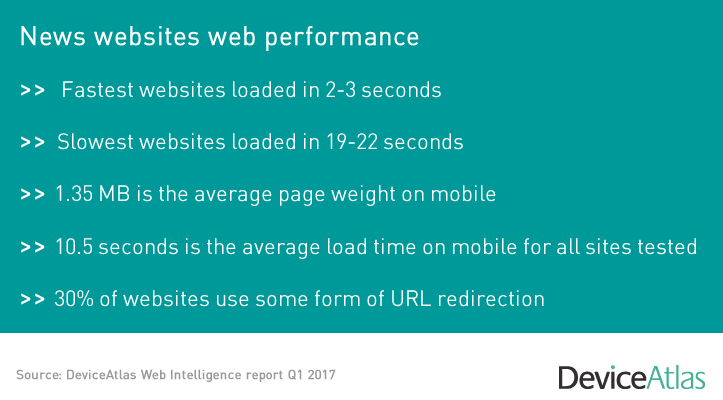 It is also worth noting here that sites who have embraced AMP but have not made the AMPed versions of their sites available outside of Google search results could easily improve their ratings by doing so. A quick win we have documented here.

There was one interesting bright spot of the report. All news websites in India scored relatively well in tests, with an average time to interactive of  7.7 seconds. The Indian sites all used some form of URL redirection. This shows that they are thinking clearly about optimizing for mobile in a region where cost, connectivity and device capability are all hurdles to overcome. Perhaps Facebook’s doomed attempt to bring a fast, free (albeit curated) internet to India made some impact after all.

The report also covers global device usage, showing Samsung lost some 5% of traffic share to its devices compared to the previous quarter, as well as deeper data points such as screen size, screen resolution, OS and browser market shares. The report is available from the DeviceAtlas website.

The importance of speed, by the way,  is by no means limited to Google’s research: